How Does an Electric Generator Work?

An electric generator is a machine that’s used to create electrical power, which can be used for any number of applications from small power tools to large industrial applications. This is a popular alternative to using grid power generated from wind turbines or fossil fuels and a high voltage steam turbine in a power plant or power station.

There are many types of generators out there, from petrol generators, portable generators and inverter generators. To home generators that may run on natural gas, standby generators for a power outage, and much larger industrial generators. However in this article, we will specifically be talking about diesel generators, also known as gensets.

Here at Advanced, our highly experienced industry experts know everything there is to know about diesel gensets. So, this blog will aim to explain how a power generator works, and what are the main working components that make them up.

How Is Electricity Generated?

A simple explanation for this is that diesel generators operate as an electrical machine that convert one source of energy into another form of energy. In this case, a power generator works by taking mechanical energy and converting it into electrical energy.

Contrary to what many may assume, there isn’t actually any real ‘creation’ of electricity. A single electric generator or multiple synchronous generators can’t make electricity appear out of thin air. It’s all to do with Michael Faraday’s theory of electromagnetic induction, which we will talk about more as we go through the different generator parts.

The Main Parts Of A Diesel Generator

Every diesel generator is made up of at least nine different - but equally important - parts. These are the:

To better understand how a power generator works to convert mechanical energy into electrical energy, we will look at the roles of all these components, starting with the diesel engine.

This is simply a basic diesel engine, it’s no different to the ones found in cars, vans, lorries or other large vehicles. This is the source of the mechanical energy, and the size of the engine matters. If you want a larger generator output, then you need a bigger engine. The larger the engine, the more electrical output you are able to produce.

This is essentially the component that’s responsible for generating power output. Here, we see the concept of electromagnetic induction come into play.

An alternator is made up of many complex components, but one of the most crucial aspects is the rotor. This is a shaft that rotates - driven by the mechanical energy supplied by the engine - with multiple permanent magnets fixed around it. In doing so, this creates a magnetic field.

This magnetic field created continuously rotates around another critical part of the alternator: the stator. Simply put, this is a variation of different electrical conductors that are tightly wound over an iron core. This is where things start to become slightly more scientific. According to the principle of electromagnetic induction, if an electrical conductor remains stationary and a magnetic field moves around it, then an electrical current is induced.

In summary, the alternator takes mechanical energy created by the diesel engine, which drives the rotor to create a magnetic field that moves around the stator, which in turn generates an alternating current.

The fuel system mainly consists of a fuel tank with a pipe that connects it to the engine. Here, diesel can be supplied directly to the engine, which will then kickstart the whole process explained above. The size of the fuel tank ultimately dictates how long a generator can remain active for.

Our range of silent canopied generators usually come with fuel tanks included at the base of the electric generator as standard. If a larger capacity of fuel is required, we can design and manufacture a bespoke extended base fuel tank, or the unit can be attached to an additional free-standing bulk fuel tank.

For larger power generator projects that require the genset to be installed into an acoustic enclosure, separate fuel systems are usually installed or located either inside the enclosure, underneath the enclosure or sometimes even both.

Here, we have the most complex part of an electric generator. The voltage regulator serves one rather self-explanatory purpose: to regulate the voltage output. There is too much that happens here to explain in this article alone, we’d probably need an entirely separate piece to describe the whole voltage regulation process.

In simple terms, it ensures that the generator produces electricity at a nice steady voltage. Without it, you would see massive fluctuations dependent on how fast the engine is working. Needless to say, all the electrical equipment we use will not be able to handle such an unsteady power supply. So, this part works its magic to keep everything smooth and steady.

These two components both play very crucial roles, and the good news is that they’re easy to understand! A cooling system works to help prevent your generator from overheating. There is coolant released in the generator which counters all the additional heat energy produced by the engine and alternator. The coolant then takes all this heat through a heat exchanger and gets rid of it outside of the generator.

The exhaust system works in the same way as your car exhaust. It takes any gases produced by the diesel engine, brings them through a piping system, and exhausts them away from the genset.

This component attaches to the engine and pumps oil through it to ensure all the parts work smoothly and don’t grind against one another. Without it, the engine will break down.

All diesel engines need a tiny little electrical motor to help kick it into action. This small motor requires a battery, which needs to be charged. The battery charger keeps it nice and full of charge, either by an external source of the generator itself.

This is simply where the generator is controlled and operated. On an electric start (or auto start) generator you will find a whole host of controls here that allow you to do different things or check certain figures. This could include anything from the start button and a frequency switch, to an engine fuel indicator, coolant temperature indicator and much more.

Every generator needs to be contained somehow, and this is what the main assembly frame is. It houses the generator and is where all the different parts are built onto. It keeps everything together, and it can be an open design - or closed (canopied) for added protection and sound attenuation. Outdoor generators are typically housed in a protective frame that’s weatherproof to prevent damages.

So, there you have it, that’s how an electric generator works. The diesel engine supplies the alternator with mechanical energy, which is then converted into an electrical current thanks to the magnetic field producing an electromagnetic induction. But, now you know exactly how that happens, along with all the different parts inside a power generator as well.

The BEST PRICES on Electric Generators in the UK 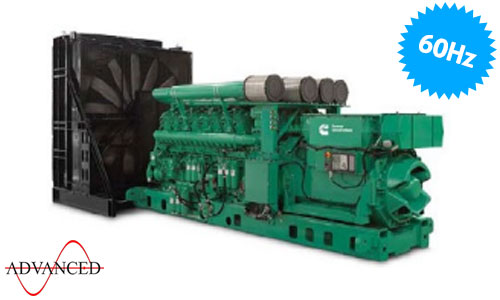